Explore Angkor Thom, Indiana Jones' style. Our photo scavenger hunt explores the immense walled city of Angkor Thom, discovering and documenting fascinating aspects of the incredible ancient city along the way. We have chosen ten locations for you to seek out during your visit and capture with a photo. Some of the challenges will require a photograph of a specific statue or carving while others will require some interactivity on the part of your group.

Use the map at right to get a rough idea of where the clues are (we don't want to give away too much!) and refer to the following images to help identify each of the challenges.

The scavenger hunt begins at The South Gate of Angkor Thom before you transfer by road to The Bayon. The hunt then continues on foot through Angkor Thom before finishing at Preah Pithu temple. If you are successful, give each other a pat on the back, jump back into the vehicle and drive down to the atmospheric East Gate for a group photo and your certificate.

Start at the South Gate of Angkor Thom

Stop at the South Gate of Angkor Thom to take some photographs of the Gods and Demons from The Hindu creation myth, the Churning the Sea of Milk, engaged in the mythical Hindu epic tug of war to obtain the elixir of immortality. You will be using your camera, iPad or smart phone a lot as you explore Angkor Thom. Gaze in awe at the monumental gates of Angkor Thom and imagine what it must have been like to be a 12th century pilgrim visiting the capital for the first time. Or an invading soldier… 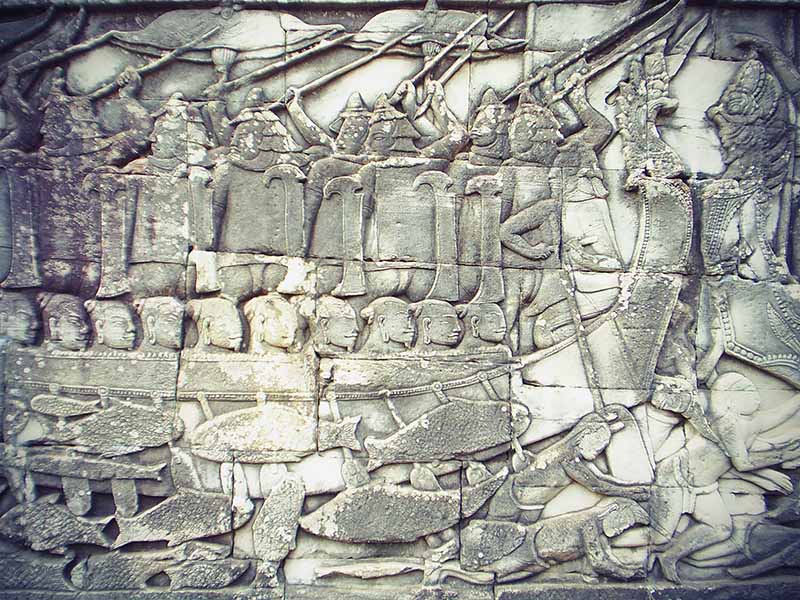 Challenge 1
Hello sailor, ships ahoy. Explore the well-preserved bas-reliefs of the Bayon, looking for the naval battle scenes of the what is now Vietnam-based Chams against the Khmers of Angkor. Take a photo of a Cham warship (not the Khmer one) complete with their signature headdresses (right).

Challenge 2
Go head to head with the greatest Khmer king of them all, Jayavarman VII (whose name in Sanskrit means "Victorious Warrior"), who ruled the Khmer Empire at its epogee from 1181–1218, defeating the Chams and erecting the majestic Angkor Wat. The dozens of massive, enigmatic faces scattered around the Bayon temple are believed to be an earthly representation of the great king himself.

Find the location where you can capture a photo of one of your team members touching noses with an enormous Bayon face like the one on the right. 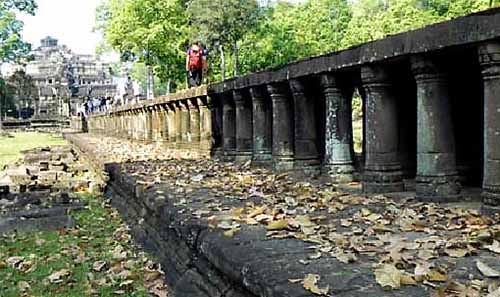 The Baphuon has been called the world’s largest jigsaw puzzle, a huge 11th century temple which was dismantled by French archaeologists inthe 1960s only for all records of the restoration tobe destroyed during the dark years of the Khmer Rouge regime. When the French team returned they were confronted with 300,000 pieces of an enormous puzzle.

Look for hidden surprise here, see the causeway from a different angle by going underneath to view the architectural marvel of more than 350 ancient pillars that suppoort the raised walkway and take a photo.

How were the temples built?
After seeing the massive size of the blocks use on such a scale, you may wonder how the petite Khmers erected such temples? As you wander around, you will see many stones with holes in them, this was used to carry the blocks with poles. Elephants were also used to move the massive laterite stones stones (below from Portugese sketchbook). 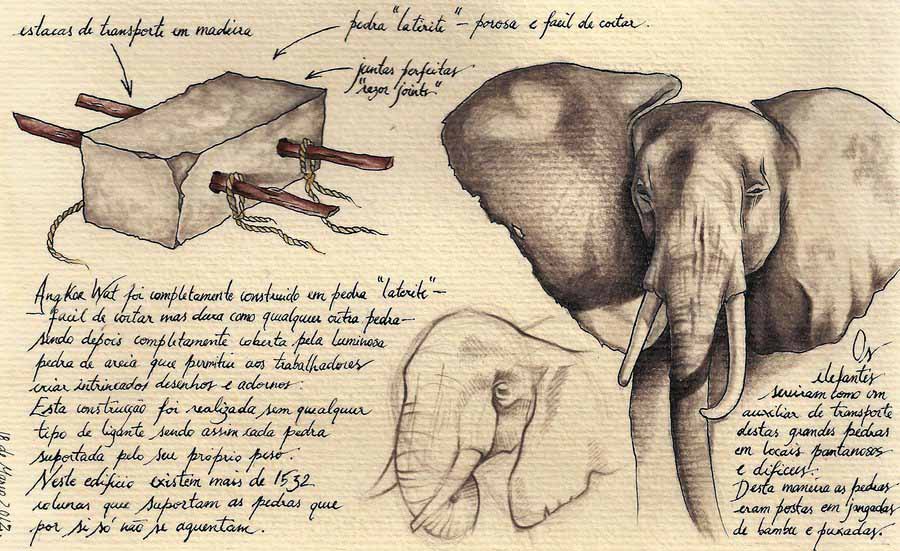 Left text: Angkor Wat was built entirely in " laterite" stone - easy to cut but rigid as any other hard rock - and then completely covered in light sand stone that helped workers create intricate designs and decorations. This construction was performed without any binder and therefore each stone is supported by its own weight. In this building there are more than 1532 columns that support the stones which by itself don't stand up.

Right Text: Elephants served as an auxiliary transport to these large stones in places marshy and difficult. The stones were put in bamboo rafts and were then pulled by these animals

Challenge 4
The Baphuon was converted from a Hindu temple to a Buddhist temple in the 16th century. Take a photo of the giant reclining Buddha’s head on the western side... it’s not as easy to spot as you might think.

Challenge 5
Head north to the pyramid temple of Phimeanakas. Walk around to discover the legless lion. This stone guardian once had two front legs, but now it has two concrete posts instead. We advise against attempting to climb the nearby staircase, as it is more like a wall. 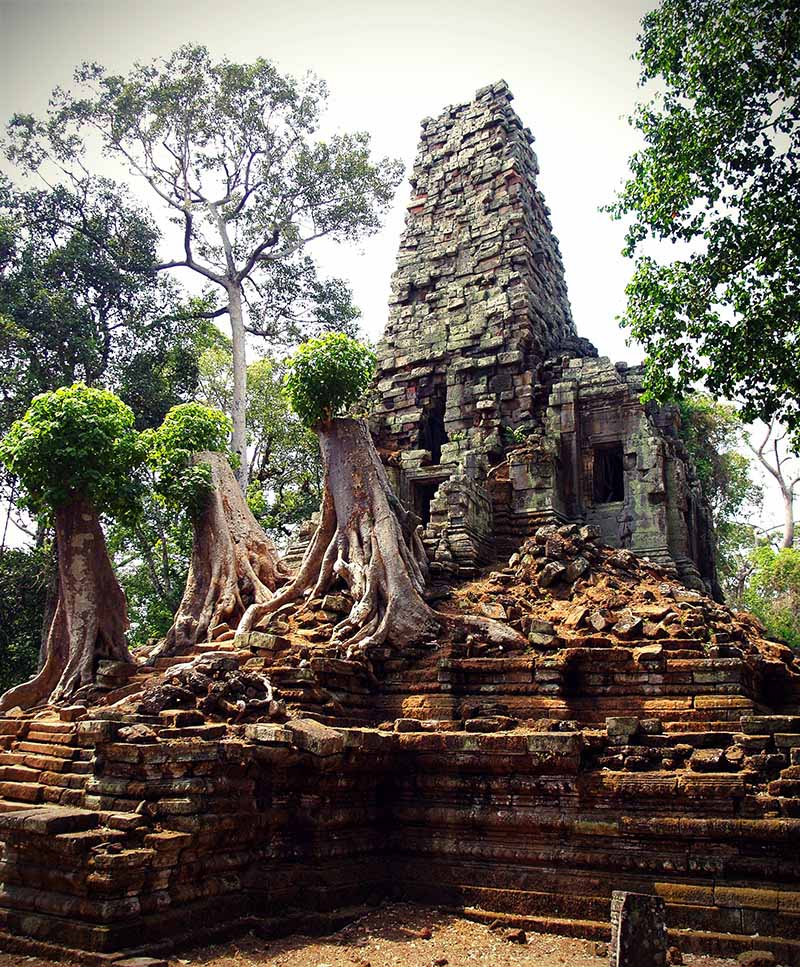 Challenge 6
Pass the royal bathing pond and head deep into the northwest corner of Angkor Thom, to the Buddhist temple of Preah Palilay. The central structure is covered in the roots of old kapok trees. Look for three of these gigantic tree roots and take a photo.

Challenge 8
Continue to the northern end of the Terrace of Elephants, the ceremonial viewing stand of the ancient Angkorian kings. Look for a hidden staircase that leads into a chamber of beautiful carvings. Take a photo of the 5-headed horse carving located here.

Challenge 9
Head across the road to the hidden temple of Preah Pithu. Explore the complex and look for a small pyramid temple at the back, known to archaeologists simply as U. Ascend to the summit and discover the Hall of 37 seated Buddhas. Count the Buddhas and you may find there are 40 figures in all. But three of them are not Buddhas but people praying to the Buddha. Take a photo and your Angkor Thom challenge is almost complete!

Challenge 10
The walking section is complete. It’s time to jump back into your transport and make for the East Gate of Angkor Thom for a team photo and to see how you well you have done on the original Angkor Thom Scavenger Hunt.

The Angkor Thom Photographic Scavenger Hunt ends at the East Gate of Angkor Thom. We hope you've learned a bit more about the enigmatic city of Angkor Thom while having fun along the way. Congratulations!

View our Temples of Angkor Tour. 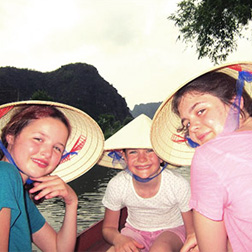 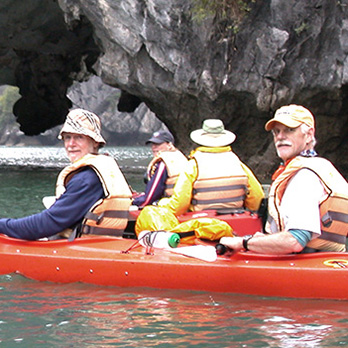