There are three biosphere areas on the Tonle Sap Lake, but the most impressive and popular with bird watchers is Prek Toal, which is easily accessed from Siem Reap. The best time of year for viewing is during the dry season from December to early February when flocks of migratory birds congregate at Prek Toal's massive flooded forest, including rare and endangered birds such as the Black-headed Ibis, Painted and Milky Storks, Spot-billed Pelican, and many others. A cruise on prek toal provides not only exposure to the rare birds, but a fascinating glimpse of local families who live in "floating" homes on stilts in the biosphere, that is less voyeuristic and touristy alternative to the boat trips through Chong Kneas.

In a remote corner of the country, rangers—many of them former soldiers—fend off poachers in Asia's most important sanctuary for endangered waterbirds.

KAYAKING AROUND A BEND in the river, I spot a dark cluster in the air and track up with binoculars. I have chanced upon one of the great wonders of the avian world: a thermal with at least 70 large, endangered birds wheeling around. One species, the painted stork, is an elegant, streamlined flyer with a long bill. Another, the spot-billed pelican, is a slower, heavier bird that reminds me of a flying boat. Higher up, I sight a species with a majestic 6-foot wingspan, a lesser adjutant, circling languidly.

Over millennia, birds like these have honed their ability to sense thermals—pockets of warm air swirling up from the earth's surface—that enable them to gain altitude, then glide effortlessly wherever they want. And for centuries, humankind has envied birds for their freedom in the air and sought to solve the mysteries of flight and other avian secrets.

One of those secrets was unveiled right here, at Cambodia's Preak Toal, in 1994. That was the year ornithologists first discovered large colonies of nesting waterbirds in this remote part of the country at the northwest edge of Lake Tonle Sap.

Unfortunately, poachers had discovered the site much earlier. During the 1990s, they removed bird eggs by the thousands, as well as chicks to be fattened up for the cooking pot. According to French ornithologist Frederic Goes, Cambodia's leading bird expert, a single poacher one year was caught with more than 1,000 eggs in his boat. Reeling from these losses, species including the greater adjutant and milky stork tottered on the brink of extinction.

Preak Toal, which encompasses nearly 52,737 acres of wetlands and flooded forest, is recognized as Asia's premier habitat for large waterbirds. In 1997, the United Nations declared Lake Tonle Sap and its shores (including Preak Toal) a UNESCO Biosphere Reserve. Over 100 species of birds have been spotted here, 15 of them endangered. Among the species that nest here are Asia's only known colonies of the glossy ibis and milky stork as well as the continent's largest colonies of the greater adjutant, Asian openbill, painted stork, black-headed ibis, Oriental darter and spot-billed pelican. Numbers of each species range from 1,500 pairs for the pelican down to just half a dozen pairs for the milky stork, the rarest of Asia's big waterbirds.

There's a gun in my kayak. It's an AK-47 assault rifle that belongs to Vanna, the ranger who is guiding us into the region. A former soldier, Vanna is now involved in a very different kind of combat—a battle to save rare birds. In addition to counting adult birds, hatchlings and eggs, his job is to keep poachers at bay. The gun is to show that he means business. Vanna is one of 27 rangers hired for a conservation program initiated in 2001 through a partnership between Cambodia's Ministry of Environment and the New York-based Wildlife Conservation Society (WCS). Goes, the first WCS project manager in Cambodia, has trained a cadre of Cambodian ornithologists who in turn are training the rangers, some of them former poachers.

The program has achieved considerable success. Rangers, for example, have eliminated mini-zoos holding rare birds on village floating houses. Their patrols and the building of 16 treetop platforms to monitor bird colonies have curtailed poaching. The work has led to the remarkable recovery of certain species, such as darters, which over a three-year period after the introduction of ranger patrols increased from 200 pairs to 2,000 pairs, according to Goes. But the fate of other species hangs in the balance.

It's not difficult to work out why the birds are here; they're here for the lake's abundance and diversity of fish. More than 200 species of fish have been discovered in Lake Tonle Sap so far. Each kind of bird has its own specialized technique for landing such plentiful prey: There are waders (herons and egrets), strikers (kingfishers), divers (darters) and surface skimmers (terns).

But people are also in Preak Toal for the fish, and their impact on the region's endangered birds goes far beyond competition. In February, the start of the official fishing season, an extraordinary cottage industry gets underway in this section of the biosphere reserve, designated a "multiple-use zone." The waters and shorelines of the vast lake are partitioned off with long bamboo fences and fish gates into a maze of commercial fishing lots patrolled by armed guards. As the lake shrinks, it turns into one of the richest fishing grounds in the world, yielding as much as ten tons of fish per square kilometer. It is estimated that over 60 percent of Cambodia's annual catch comes from Lake Tonle Sap or the Tonle Sap River.

Lot owners pay hefty sums for concession rights, which are leased for two-year periods to the highest bidder. To maximize profits, concession owners sublease their fishing rights. Subleasers, however, may engage in illegal practices such as cutting down trees for firewood, damming rivulets, pumping out streams and sweeping waterways with illegal fine-meshed nets. And each fishing season, birds get accidentally snagged in nets or on lures. "The lot owner at Preak Toal doesn't care about conservation," laments Goes. "The money is in the fish."

We have not set foot on dry land in almost a week. Like the birds, we have spent all of this time either on the water or in the trees. Kayaking through this zone of flooded forest is like encountering a lost world—the predominant species are birds. It's a magical atmosphere, like going back to the dawn of time. The air is alive. As we kayak through, birds fly up—herons, egrets, cormorants, darters. The odd kingfisher rockets past in a brilliant flash of color.

My favorite bird is the painted stork. From a bamboo monitoring platform atop a tall tree, I observe a group of them through a spotting scope. They are nesting about 500 meters away, the adults fanning out their wings to shelter fluffy white chicks from the tropical sun. The painted stork could have flown straight off the pages of a fairy tale—an elegant flier with long neck and orange bill outstretched. There are estimated to be over 1,000 pairs nesting at Preak Toal.

Still, for me, the most thrilling sighting is the greater adjutant—spotted from another canopy platform. One of the world's rarest storks, the bird has a bizarre appearance: a wingspan exceeding six feet, bald head, huge bill and massive hanging gular pouch (biological function unknown). This bird is in a class of its own. Preak Toal is Asia's last stronghold for this huge waterbird: Up to 40 pairs nest at Preak Toal in the dry season, out of a total of perhaps 100 scattered around Lake Tonle Sap.

The potential for birding at Preak Toal is huge: Over the course of traveling in Asia for several decades, I have never seen so many different bird species in one place—nor seen so many so easily. In addition, Preak Toal lies just a few hours by boat from the majestic ruins of Angkor, Cambodia's top tourist draw, which means there already is a large tourist market to tap into. Ecotourism could provide lucrative income for local villagers and at the same time help preserve the birds' habitat.

In the thirteenth century, artisans at the Bayon Temple (which lies at the center of Angkor) sculpted bas-reliefs that clearly show large waterbirds like the greater adjutant, Sarus crane and spot-billed pelican. Remarkably, some of these bas-reliefs serve as a record of bird species now considered extinct at Angkor, including the green peafowl, a victim of humanity's greed for its gorgeous train feather. The hope of ornithologists like Goes is that no more birds will go this way—that they will continue to thrive in Preak Toal.

While researching his guidebook Vietnam, Cambodia and Laos (Avalon Travel Publishing), Michael Buckley has explored many remote parts of the region and has lead our photography tour in Vietnam and Cambodia.

Today we travel to the pristine biosphere of Prek Toal, home to some of the most endangered bird life on the planet. The immense Tonle Sap Lake is one of the most productive bodies of water in the world and millions of fish spawn here in the flooded forest. Prek Toal lies on the northeastern shore of the Tonle Sap, about one hour by boat from the port at Phnom Krom. Prek Toal is a vast area of natural flooded forest that draws thousands of birds annually to breed during the dry season. This is one of the premier places in Southeast Asia to see rare birds such as storks, adjutants, pelicans and ibis. Birdwatchers will drift through their habitat and can observe large flocks of birds feeding on the lake shore, perched in the trees or soaring above the forest. 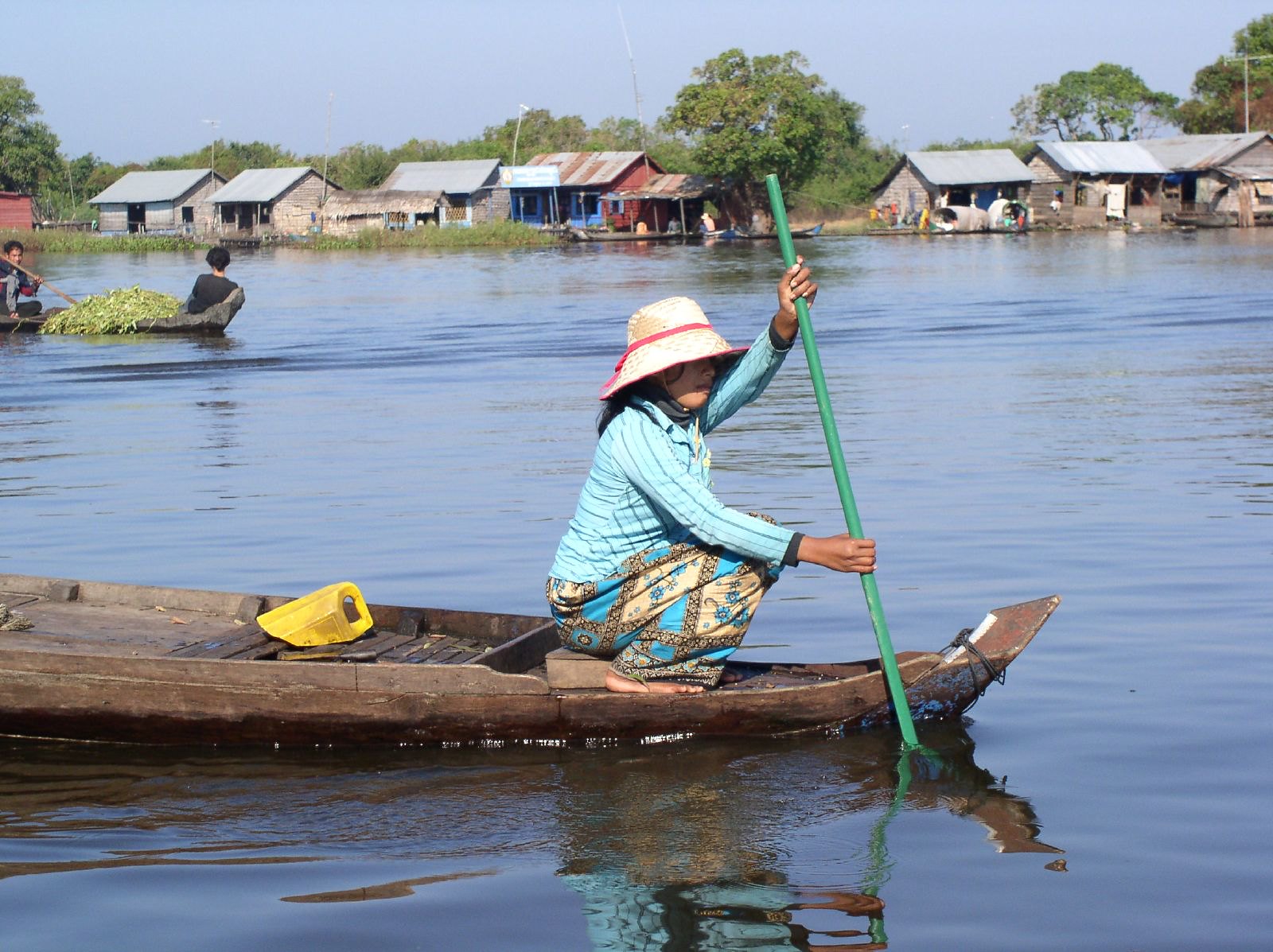 Our trip to Prek Toal starts early at 5.30 AM, to the boat dock and then transfer by boat from Phnom Krom to Prek Toal, enjoying a packed breakfast along the way. The morning is spent bird watching on a traditional wooden boat as we glide through the flooded forest with local specialists. After a local lunch, we experience local life in the floating village, learning about different fishing techniques and traditional water hyacinth weaving. We return to Siem Reap late afternoon.

Prek Toal is one of the three core areas in the Tonle Sap Biosphere Reserve. Situated in Battambang Province the village of Prek Toal lies at the mouth of the Sangke River. The core reserve is 21000 hectares located within Fishing Lot Number 2, the largest and most productive in the Tonle Sap Lake. The sanctuary harbors seven species of water birds of global significance: Spot billed Pelican, Milky Stork, Painted Stork, Lesser Adjutant, Greater Adjutant, Black headed Ibis and Oriental Darter.

The Prek Toal area consists of seasonally inundated freshwater swamp forest with a high botanical diversity. Short tree shrub lands make up most of the landscape, forming a dense under story with scattered large trees, which form the vital nesting ground for large water birds. Prek Toal is unmatched throughout South East Asia for the number and populations of endangered water birds it supports through the dry season. Large flocks of cormorants, storks and pelicans are almost guaranteed from January to May, along with herons, egrets and terns.

It really is a bird-watcher's paradise but our one-day program does allow some time in the Prek Toal village to get a flavor of the lifestyle as well, so it will appeal to all travelers looking for a unique experience in Cambodia away from the crowds. Regardless, even non-birders are impressed by the sheer scale of the bird colonies there.

When to Go?
January to March sees the most birds visiting Prek ToaHue is typically cool and foggy, with consistent rainfall, but still pleasant and strikingly beautiful. Rain is heavy between August and October; the rainy season extends May-December which leaves a dry season, January through May, as periods for exploring Prek Toal.

Ready to get started planning your visit to Prek Toal? Submit a contact form below, or call us:
San Francisco at (628) 256-0093