Xi'an After hotel check-in, begin exploring the old town, embarking on local bikes for a leisurely cycling trip or walk along the ancient 14th century city walls of Xi'an. In the old town's center are several historic monuments to visit, including the Giant Wild Goose Pagoda (A.D. 652) and the Small Wild Goose Pagoda (A.D. 707), both of which were used to store Buddhist monuments brought from India during the Tang Dynasty.

Also located here is the Xi'an Museum, housing fine sculptures, ceramics and bronzes. Also visit to the Banpo Museum, housing the remains of several Neolithic settlements dating from 5600 - 6700 B.C. or exploring the city's attractions by preference, including the Shaanxi Provincial Museum, Great Mosque, and contemporary sights until late afternoon.

After dinner, strolling through the shops of the commercial district and the Muslim night market which locals congregate to for the variety of snacks and delicious street food.

If you've allotted a full day in Xi'An, the Shaanxi History Museum is a stylish modern museum, loaded with exquisite Chinese treasures, including paintings from Tang dynasty tombs in the area. The collection is fabulous – golden bowls and dragons, jade weapons, seals and bracelets, ceramic figures (the camels are fantastic), and don't miss the exhibit of Tang costumes and personal ornaments.

The discovery of the Terracotta Army is considered one of the greatest archaeological finds of the 20th century and only the 1922 excavation of the tomb of Tutankhamen was of comparable significance and captured the imagination of the world to a similar degree. Dating from the third century BCE, the thousands of molded soldiers, officers, horses and wagons form a small component of the underground army buried to protect the legendary first Emperor of China during his afterlife. His reign, unifying competing kingdoms, anticipated Xi'an's subsequent rise to global prominence as the capital of a mighty empire in both the Han (206BCE - 220 CE) and Tang (618-907) dynasties.

Like the treasure of the boy pharaoh, the terracotta warriors possess a magnetic, almost magical power of attraction. (A dozen complete figures were displayed at the British Museum in 2008. The exhibit lasted for seven months and nearly a million people attended. And even though the museum kept its galleries open until midnight twice a week, visitors still had to be turned away). It was the spring of 1974, and the Cultural Revolution aimed at obliterating China’s extraordinary history had only just ended. Several farmers were digging a well in a nondescript field about an hour’s drive from the ancient city of Xi’an when they unearthed the first fragments of a terracotta figure. Little did they know that beneath their feet were 130 chariots, 670 horses and more than 8,000 soldiers. 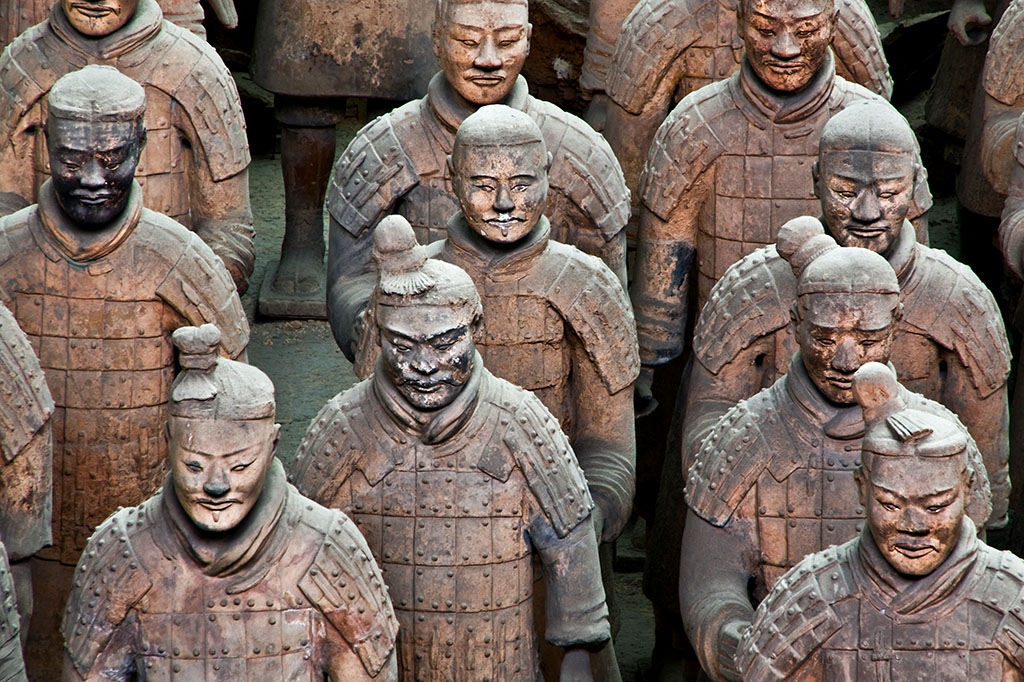 As well as its epic scale, the Terracotta Army has particular significance because it was buried to accompany the first emperor of China into the afterlife. Qin Shi Huang reigned from 221 to 210 B.C., and those 11 years of brutal rule gave the Chinese the ineradicable idea of themselves as a unified people. His dynasty, the Qin (pronounced “chin”) is also the origin of the English word “China.”

Xi’an today is a city of around 9 million people, known as a center of the Chinese high-tech and aerospace industries. The concrete sprawl seems interminable on gray mornings as you head east on a 20-mile drive and after about 50 minutes, catch sight of an enigmatic green pyramid, rising 250 feet from the surrounding fields. The actual mausoleum of Qin Shi Huang has yet to be excavated, and almost certainly contains greater wonders than the army that was assembled to guard it. But the Chinese archaeologists have their hands full already and are in no particular hurry (They are also afraid that sudden exposure to the air could damage the contents). The Terracotta Army itself lies half a mile farther on, concealed beneath a series of low-rise buildings. There are three pits, of which Pit No. 1 is the most extensive and spectacular, plus a museum containing two astonishing bronze chariots that were unearthed in 1980. In 1987, UNESCO added the Terracotta Army and the Tomb of the First Qin Emperor to the list of the World Heritage Sites. 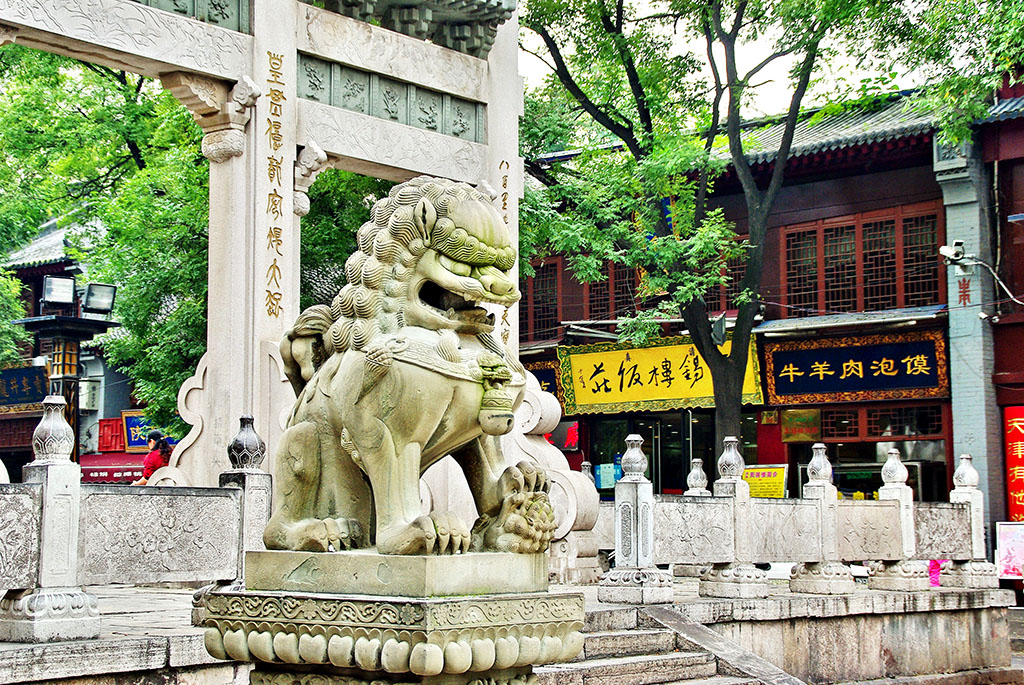 Now that Chinese have sufficient money to travel, the crowds can be great at the country's top domestic tourist destination. Fortunately, whatever the circumstances, the first glimpse of the Terracotta Army is just as impressive and overwhelming as one might wish. The vast extent of Pit No. 1, filled by rank upon rank of impassive gray figures, is a truly extraordinary sight. Above all, it is the warriors’ individual features that make the experience so unforgettable. They seem to be real people who were abruptly petrified and it will be difficult to think of any other archaeological site that brings the remote past so vividly to life. The humanity of the sculptors is revealed in the statues’ unique expressions, many of them must be actual portraits, and you are left with the thrilling and humbling realization that in central China, 2,200 years ago, these were individual human beings, recognizably just like us. 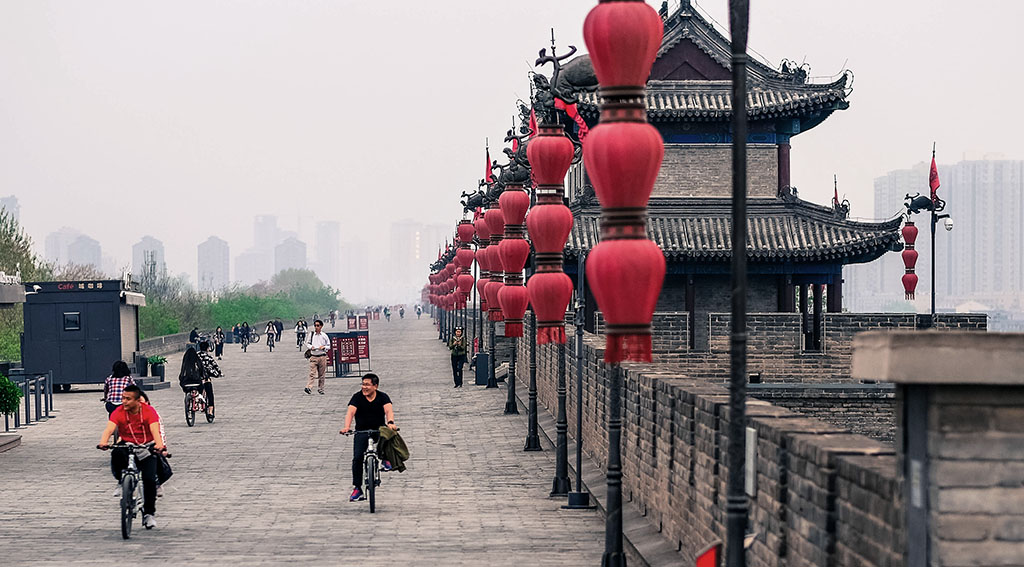 So you want to add the ancient imperial capital of Xi'an to our 12-day China Iconic Itinerary? The place to squeeze it in is between Beijing and Lijiang, and there are two ways to do it. If you're time-starved and all you really want to see is the Terra-cotta Warriors—the subterranean life-size army that China's first emperor built in the third century B.C. in an attempt to carry his power with him into the afterlife—then fly into Xi'an in the morning and fly out later the same day. More specifically, take the 7:30 a.m. flight from Beijing that lands at 9:25 a.m., meet your car and English-speaking guide at the airport, drive to the Terra-cotta Army site (travel time from the airport is one hour each way), tour the excavation pits (this takes 90 minutes if—and this is a big if—your tour operator has arranged for special parking privileges right next to the pits; if you must park in the lot, add a 45-minute round-trip walk), return to the airport, and fly to Lijiang on the 4:40 p.m. flight that lands at 8:15 p.m. Adding this day in Xi'an to your Iconic Itinerary means adding an extra night in Lijiang.

If you want to come away with a true appreciation for Xi'an, however, you must spend a night there-which means adding two nights to your Iconic Itinerary: one in Xi'an, one in Lijiang. Here's how to do it: Catch the 7:30 a.m. flight from Beijing and you will arrive at the Terra-cotta Army Excavation Site close to 11:00. After visiting pits 1, 2, and 3 and touring the Bronze Chariot Museum, grab lunch at the restaurant (nothing special, but it's your only convenient option) and check out the gift shops at the visitors' center. See an old man in a Mao uniform signing books? That's Yang Zhi Fa, one of the peasants who discovered the Terra-cotta Army in 1974 when he was digging a well.

If you leave the Terra-cotta Army for the city of Xi'an at 1:30, you should arrive in the Old Town by 2:30. Weave through the narrow lanes and past the souvenir stands of the old Muslim Quarter on foot until you arrive at the Great Mosque, one of China's largest, and a unique fusion of Chinese and Islamic architecture. Gerald Hatherly of A&K can arrange for private entrée into the Mosque's piece de resistance: the magnificent Prayer Hall, normally closed to non-Muslims. At 3:30 head to the Shaanxi History Museum—a must for a proper understanding of the achievements of the Han period (206 B.C.-220 A.D.) and the Tang Dynasty (618-907 A.D.). Gerald can get you into the vault to view a series of eighth-century imperial murals that come from three royal tombs of the Tang Dynasty and are off-limits to the general public. At 5:00 leave for the South Gate of the city's 14th-century wall and spend half an hour strolling the wall, admiring the views of the Old Town.

After breakfast on the plane and lunch at the visitors' center, you will be dying for a decent dinner. Xi'an is famous for its dumplings, and one of the best places to sample the tremendous variety is at Defachang, the largest of Xi'an's dumpling houses. Yes, it's touristy, but the food is worth it, and you can watch the dumplings being made in the kitchen (Anban St. Zhonggulou Square; 86-29-727-6453; meal for one, $12). After a post-dinner stroll through Xi'an's colorful Hui Muslim night market, it will be time to collapse at your hotel. Since you're spending so little time there, consider the charmless but economical three-star Bell Tower Hotel (110 Nan Da Jie; 86-29-8760-0000; doubles, $78-$120). If five-star comfort is a must, go for the Shangri-La Xi'an (NOT the Shangri-La Golden Flower) —the newest and plushest property in town. Centrally located it's not, but it's convenient to where you're headed tomorrow morning (38B Keji Road; 86-29-8875-8888; doubles, $115-$198).

At 8 a.m. hit the road again for one last sightseeing stop before your flight out: the Han Yangling Excavation Site, currently the most interesting of the archaeological digs in the Xi'an region. In 1990, when a new road to the airport was being built, archaeologists who were called in to do soil test sampling discovered a series of satellite tombs that turned out to be the burial site of Jing Di, an emperor who died in 141 B.C. Eighty tombs have now been excavated, yielding more than 100,000 artifacts and treasures from the Han period. The site's newest museum is the most technologically advanced of its kind in the world: You can walk over the tombs and then descend and view them from the side as well.

Head for the airport at 9:45 a.m. so you can catch the 10:55 a.m. flight that will put you down in Lijiang (after a three-hour layover in Kunming; bring a good book, as there's little point in leaving the airport!) at 5:05 p.m.