For elephant encounters, Thailand provides choices like no other place with camps and other venues throughout the country for getting up close and personal. No matter what your opinion is on the correct way the animals should be handled or presented, the camps and other venues do provide food, shelter and care for elephants for which there would be no funding for without caring tourists. Overall, the growing trend has been for humane and cooperative camps rather than circus-style activities or riding. Travelers may now even volunteer to care for animals at some camps involved in elephant conservation.

Under Threat
Thailand is a country that has long revered the elephant for its royal and religious significance – is home to some 4,000 of the fewer than 50,000 Asian elephants (Elephas maximus) still surviving.

Compared to the relatively enduring population of African elephants (currently estimated to number about 500,000), the rapidly dwindling Asian population was a major cause of concern. In 1975, the Convention on International Trade in Endangered Species of Wild Fauna and Flora (CITES) banned the commercial trade in Asian elephants. Thailand ratified the convention in 1983, and has been subject to its provisions ever since. In 1986, the Asian elephant was added to the World Conservation Union (IUCN) list of endangered species. 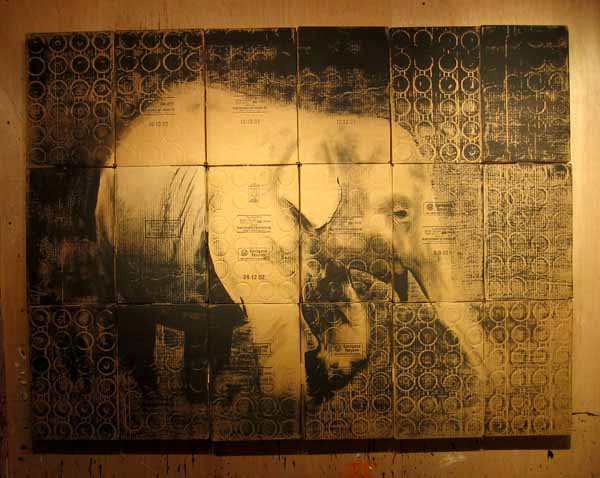 In the case of African elephants, ivory poaching contributed most to the drastic population decline. Asian elephants, on the other hand, have been much more affected by the rapid loss of habitat. In 1950, some 60 per cent of Thailand was covered with forest; today it is less than 15 per cent, and declining. Although proper data is lacking in Thailand, the wild population is estimated at between 1,000 and 1,500. The latest government statistics (2003) for elephants living in captivity put the current population at 2,874, which is up from a low of 2,118 in 1998. However, this is still significantly down on the 4,874 domesticated elephants recorded in 1980. Due to various protection efforts over the past two decades, many conservationists are confident the Asian elephant has a long future in Thailand – even if in smaller numbers.

“My feeling is the population of elephants has stabilized,” says Richard Lair, an expert on Asian elephants who has lived in Thailand more than 25 years and works with the government to establish what has become a role model in eco-tourism and conservation. The Thai Elephant Conservation Center (TECC) in Lampang in Northern Thailand is home to 48 elephants and cares for another 70 elsewhere, including rehabilitation areas.

Not all elephant activists in the country are as optimistic. Soraida Salwala, secretary general of the Friends of the Asian Elephant, finds the regeneration rate alarmingly low. She estimates females in captivity give birth to only one calf in their lifetime rather than the more typical eight for wild females. Keeping all elephants in "the wild" would be the most ideal situation. But given the reality of expanding human settlements, managed contact has become inevitable and necessary for their protection. Tourism has played a key role in conservation efforts and, because of the enormous affection humans feel for elephants, tourists will continue to influence their future.

The dilemma over the issue of employment for elephants reflects Thailand’s unique situation:

According to Thailand’s Livestock Development Department, domesticated elephants reside in some 73 tourist camps and, increasingly in the past few years, in private sanctuaries. Some operate under state agencies, such as the TECC, while others are run by private individuals.

Conservation Efforts for Domesticated Elephants
A variety of agencies and organizations are determined to protect the future of Asian elephants in Thailand.

Several conservation groups have set up hospital facilities to nurse injured elephants and care for abandoned ones. Both the TECC and Friends of the Asian Elephant have hospital facilities that provide assistance to other elephant foundations, train veterinarians in elephant care and run mobile clinics. The TECC is now one of nine royally initiated projects that the Thai government promotes in overseas tourism and travel marts/trade shows.

To care for the very young and very old, sick and injured elephants, as well as overly aggressive bulls no longer capable of coexisting with human communities, and to allow them a life akin to their wild relatives, conservationists have established sanctuaries that provide natural habitat refuges. Land has been rehabilitated and planted with crops to feed the elephants and their mahouts.

The following highlights conservation efforts by some of the many groups operating in Thailand:

Proposed Legislation
Conservationists see a need for updating the 1939 law which governs domesticated elephants and classifies them as draught animals. The reformed law would closely monitor the dynamics of those in captivity and thus aid their preservation. The current draft of legislation, which the many conservationists and animal rights activists in Thailand believe is desperately needed, requires:

Fund Raising
Most conservation groups rely on public donations. The Thai public is known to be generous with donations to support the country’s elephants, especially for the purchase of medicines and facilities for care.

Some innovative efforts to raise funds for further elephant protection and care include the sales of books, greetings cards, T-shirts, key rings and other elephant-themed memorabilia, as well as the auctioning of elephant images.

Species Propagation
The TECC veterinarians, in collaboration with Chiang Mai University veterinarians, have successfully impregnated an elephant through artificial insemination; she gave birth to a 100-kilogram male baby elephant on 7 March 2007. While the veterinarians are excited by the prospects of helping the elephants increase their birth rates, they also acknowledge that it is a difficult and arduous process for the females.

Conservation Efforts for Wild Elephants
The biggest wild populations are found in the Thung Yai and Huai Kha Khaeng Wildlife Sanctuaries and the Khao Yai and Kaeng Krachan National Parks. 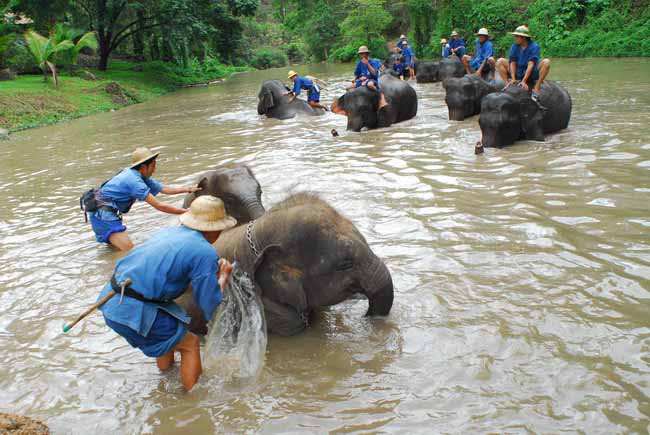 Despite the protected wildlife areas, the expansion of human settlements (and the corresponding loss of forest land to logging and agriculture) is squeezing wild elephants into ‘green islands’. In time, the isolated populations will be at risk of inbreeding if there are no connecting corridors between those islands.

A few organizations are tackling the problem of human-elephant conflict in Thailand.

Elephant Conservation Network (ECN)
Troubled by the growing threat of crop-raiding to people and elephants alike, the Elephant Conservation Network (ECN), a community-based conservation initiative, was set up in Kanchanaburi in 1998 to seek a collaborative long-term solution based on a thorough understanding of the problem. Working with local people and forest rangers, the small team of researchers has been studying the ways in which elephants and people make use of the forest in the Salakpra and Tham Thanlod protected areas at different times of the year. Outside the forest, the ECN team is also recording every crop-raiding incident while mapping land use around the forest and conducting a socio-economic survey.

The ECN team includes fifteen local villagers who volunteer to monitor the crop raiding in their area. “Our aim is to collaborate – with villagers, with protected-area personnel, with local leaders – to find sustainable solutions. Ultimately, nothing will work unless we all work together,” explains Belinda Stewart-Cox, a British researcher who started ECN with Jittin Ritthirat, a former journalist. They aim to develop a raft of integrated projects that will help restore and protect the forest area for local people and elephants. If elephants have enough natural food year round within the protected areas, they will raid crops less frequently.

World Wide Fund for Nature (WWF)
The international conservation organization began a project in 2005 to step up efforts to resolve the increasing conflicts between humans and elephants in Kui Buri National Park in Prachuap Khiri Khan province, through better land management.

Wildlife Conservation Society (WCS)
In its Kaeng Krachan Elephant Conservation Project that began in 2001, the Wildlife Conservation Society is working with local and national government officials to map water sources and assess the elephant population and human-elephant conflicts around the park. In meetings with farmers, they are discussing ways of reducing such conflicts, such as stringing ropes covered with chili-laced grease around the perimeter of fields.

Art & Conservation Project. Did you know elephants can paint? Yes, they can and they're quite talented and deliberate in creating art with a brush held in their trunks. The elephants of Asia are also painting to save their own lives. Pictured here is 8-year old Hong from Chiang-Mai, Thailand, one of only three elephants who have learned how to draw other elephants. David Ferris, the Director of Asian Elephant Art & Conservation Project is helping to save the diminishing number of Asian elephants left on our planet. The project works with domesticated elephants they teach to paint. The AEACP raises funds through donations and the sale of artwork created by elephants in order to fulfill its mission. To learn more about the Asian Elephant Art & Conservation Project go to: http://www.elephantart.com/

To read more or contact the elephant organizations, networks, foundations and camps in Thailand:

Treasure Our Elephants-
Foundation for the Conservation of Northern Elephants
www.treasurethaielephants.org

Friends of the Asian Elephant
www.elephants-soraida.com

Images reprinted with permission from The Treasure of Our Elephants Foundation.

LAOS
The Elephant Village The elephant camp and tour destination is located 15km southeast of Luang Prabang and protects and rehabilitates previously abused elephants, now seriously endangered in Laos. The village provides tourists the opportunity to observe and spend time with the elephants, partake in a mahout training course and take a short elephant ride.