>Are the tunnels of Cu Chi, Saigon's most popular tourist site, worth a visit? Something to consider if your stay in the Vietnam and Saigon may be limited. Derided as kitschy and a symbol of "war tourism," nonetheless the Cu Chi Tunnels are Saigon's, and indeed, Vietnam's most popular day-trip destination along with the nearby colorful Cao Dai Great Temple at Tay Ninh. How overrun is sit? If you're time is limited in Saigon, we encourage you to remain in Vietnam's most dynamic city, if only to save the half-day the side trip to Cu Chi entails and being among crowds of tourists. Also consider the Mekong Delta if you have a day to witness life on the Mekong, including the fascinating floating markets. If you're traveling to Hue with us and have a keen interest in the war, we can visit another far less touristed network of restored tunnels near the former DMZ (de-militarized zone).

Cu Chi Tunnels are located near the village of Ben Suc, about 75 kilometers northwest of Saigon, and some 40 kilometers from the town of Cu Chi. The tunnels were part of an under­ground network that zigzagged from the southern tip of the Ho Chi Minh Trail near the Cambodian border to the Saigon River. Most Vietcong tunnels in the Cu Chi area have been sealed, but a few passageways were doubled in width and height to accommodate Western tourist bodies.

There are actually two tunnel locations, both in the direction of Ben Suc village. Backpackers usually go to Ben Dinh while Ben Duoc Tunnels, about five kilometers away, provide a more comprehensive overview.

The Vietcong used to crawl on their bellies through the dark, dank tunnels, but visitors can walk through them (albeit hunched over). After scrambling through the tunnels for a claustrophobic, sweaty 15 minutes, you'll wonder how anybody could last a day in the tunnels, let alone a year. The Vietcong carried on much longer than thatpeople got married and women gave birth down here. Below ground was a complete system of kitchens, rudimentary clinics and operating rooms, meeting rooms, and sleeping chambers with bamboo beds. The network also incorporated storage chambers for weapons and rice, drinking wells, ventilation shafts, false tunnels, and boobytrapped passages.

The Vietnamese spent decades digging in the red­dishbrown laterite clay in this areathe tunnels were all built with simple hand tools. Up to 50 kilometers of tunnels were constructed by the Vietminh fighting the French between 1948 and 1954. Between 1960 and 1965, their successors, the Vietcong, added an astonishing three-level network four times as big, bringing the total up to over 200 kilometers. The deepest layer of tunnels lay eight to 10 meters underground. Up to 16,000 guerrillas could live in the tunnel complex at any one time, though 5,000 to 7,000 was the normal complement.

The soil at Cu Chi was perfect for tunneling the clay was sticky, allowed some air penetration, did not crumble, and proved remarkably stable. The Vietcong employed ingenious cam­ouflage to conceal tunnel exits, entrances, and ventilation holes.

A question that immediately springs to mind is what did the Vietcong do with all the dirt collected from all that digging? The Vietnamese, intimate with the lay of the land, never left earth from the tunnels in mounds or near a tunnel site. Instead, it was smuggled out in small quan­tities and recycled into house basements or other structures, poured into streams, and dumped in recent bomb craters.

The tunnels were key to Vietcong success, providing a stronghold close to Saigon. Against superior American firepower and technology, the Vietcong had the element of surprise. By the time U.S. troops arrived they faced an army of moles: Vietcong could pop up a trapdoor, fire away, and be back down the hatch before the U.S. soldiers could react. 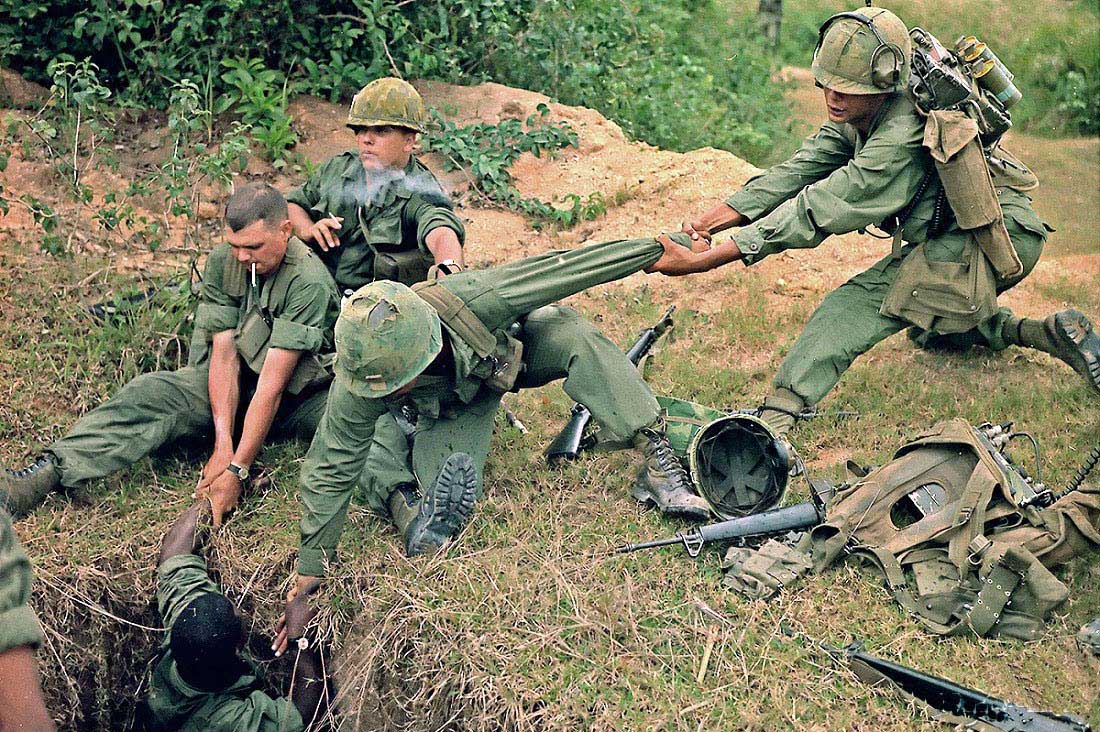 Nor was it easy to destroy the VC "subway." United States forces declared Cu Chi a freefire zone and dropped 50,000 tons of bombs on the region, but the tunnels continued to operate. Blowing gas or pumping water into the tunnels proved ineffective, as each section of an important tunnel could be sealed off by the Vietcong. The United States formed squads of "tunnel rats"— slim, smallbodied men who probed tunnels — and sniffer dogs were also used (above). These rat squads only partially uncovered the mysteries of the underground labyrinth. Among the visitors to Cu Chi have been U.S. veterans who come back to see this incredible network with their own eyes.

The Cu Chi Tunnels area is the most accessible and commercial yet (dubbed "Cong World" by a visiting Western reporter). After crawling around in the tunnels, you can move over to a nearby firing range, where you can empty an AK47 or M16 rifle at targets (Note: the noise can be deafening). Souvenir shops sell war-related paraphernalia — you can buy a genuine pair of rubber sandals once worn on the Ho Chi Minh Trail. Attendants at the shops wear black pajamas and rubber sandals, just as the Vietcong did.

We recommend departure from Saigon by 9:00 AM, to allow for reaching Tay Ninh and the noon Cao Dai service, if you are going there as well. We then depart after for the Cu Chi Tunnels and are usually back in Saigon around dinner. A trip only to Cu Chi will place you back in Saigon by about lunch (or we may organize a delicious picnic in Cu Chi, and may be in order if running late departing Saigon in the morning).