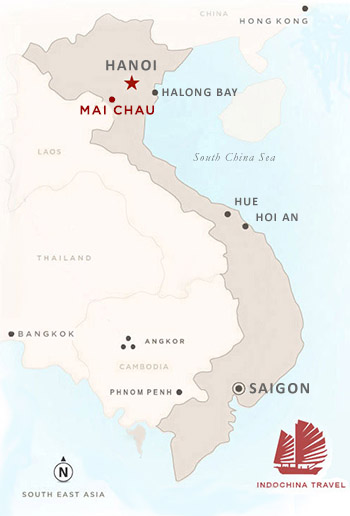 The town of Mai Chau lies in a picturesque valley of teh same name with a patchwork quilt of rice paddies, farms, and long house villages. Located only about 36 miles (60 kilometers) southwest of Hoa Binh and about 80 miles (135 kilometers) from Hanoi, it is only about about a three-hour drive. Mai Chau offers some of the most spectacular scenery in Vietnam with a myriad of traditional hilltribes, mostly Tai and H'mong, scattered around the area.

Similar to Sapa, but not as high up nor as popular, Mai Chau sees only a trickle of tourists for now and is definitely a "see it now" unspoiled destination. At low elevation, Mai Chau is more pleasant weather-wide than Sapa, which is often socked in with clouds and experiences freezing temperatures in winter. In the spring, Mai Chau displays a riot of color with blooming flowers and peach blossoms and in October, golden fields of rice about to be harvested.

- Hilltribes - a last glimpse of colorful, traditional peoples who lifestyles will change dramaticall in the next couple of decades, if that long

- Striking karst scenery, which gives the area the nickname "the Dry Halong Bay"

- One of the least touristy places in Vietnam

- Different than any other place you will likely visit in Vietnam 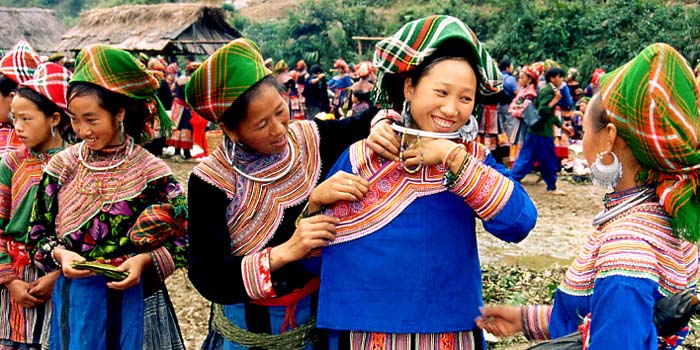 Using Mai Chau as a base, one may literally stroll past rice paddies to reach a nearby Tai village. The Tais live in raised wooden long houses in the shape of tortoise shells, with sloping roofs made from palm or sugarcane leaves. Inside are polished bamboo-slat floors with woven mats, a fireplace for cooking, and a handloom; buffalo, chickens, and pigs live under the house. There are usually fishponds in the area. 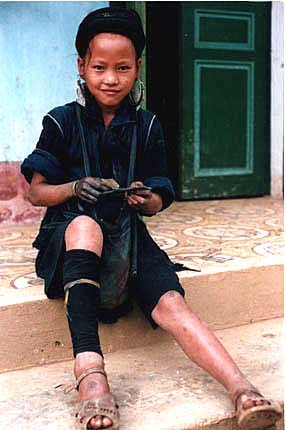 Hmong villages are a little harder to reach. They're typically much poorer and villages are often composed of simple huts with earthen floors. The Hmong women wear elaborately patterned and colorful tops and skirts the full outfit can take three years to embroider reflecting what group of Hmong they are from such as Green, Black (right with the telltale indigo dyed hands), Red, White, and Flower. The men regularly smoke opium.

Opposite the bus station in Mai Chau is the central covered market, visited by minority groups in the area on Sundays. In the Tai village there are traditional long houses which have been adapted for use by visitors and there are a dozen long houses here accepting foreign guests on a regular basis.

The Tai women will also stage a dance soiree; the repertoire includes the delicate butterfly dance (performed with fans) and the striking bamboo dance (daintily dodging bamboo sticks that are smashed together); the performance is followed by a large pot of Tai homebrew rice wine, complete with super long bamboo straws.

Using the village as a base camp, we will trek out through rice paddy trails to outlying villages in the area. On these treks you can attune yourself to the rhythms of rural life watching locals harvesting rice, carrying baskets of goods around, or thatching of a new house. 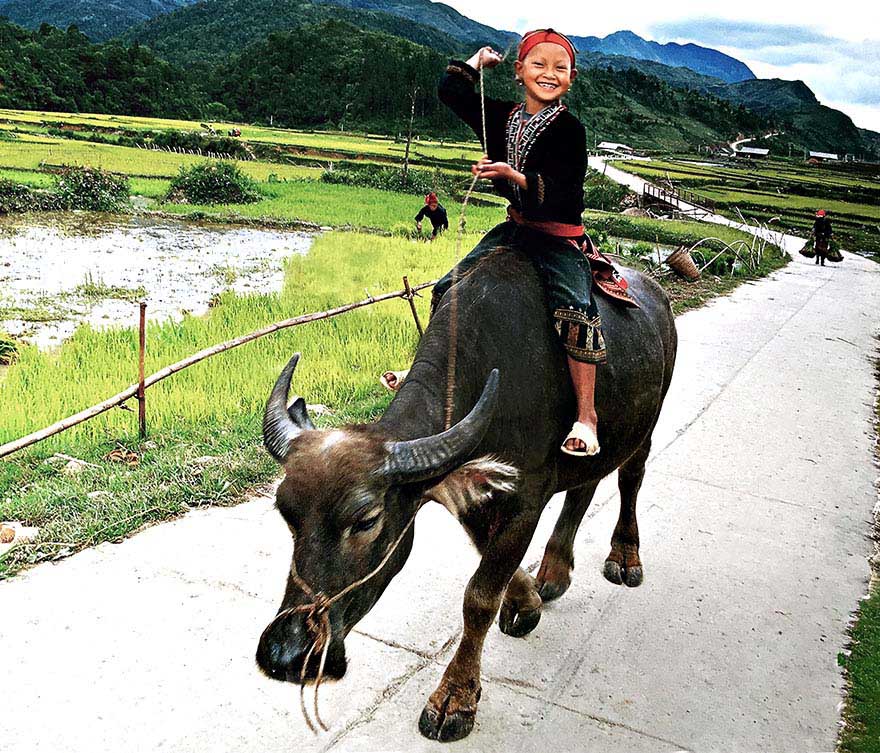 A two day trip is a perfect escape, but longer treks of up to four days, with varying degrees of difficulty, are including exploration of nearby Puluong National Park and further out to Cuc Phuong National Park and the karst landscapes of Ninh Binh(known as the "dry Halong Bay"). Son Doong Caves, the largest caves in the world discovered in 2009, are also not far from here.

En route to Mai Chau by private car, we can also pause at Man Due, a town close to Mai Chau with great karst scenery. All in all, Mai Chau offers an easy escape from Hanoi but remains world's away for the time being.

Mai Chau offers some of the country's most scenic hiking and biking, from short, leisurely rides and walks through the valley along the river or longer treks into Puluong National Park (below) from two to five days. As we like to arrange in several other places in the region, including Inle Lake in Myanmar, Luang Prabang in Laos, and in Hue and Mai Chau on the Vietnamese central coast, there's remote access and adventure afforded loading bikes onto small boats and heading up or down stream. 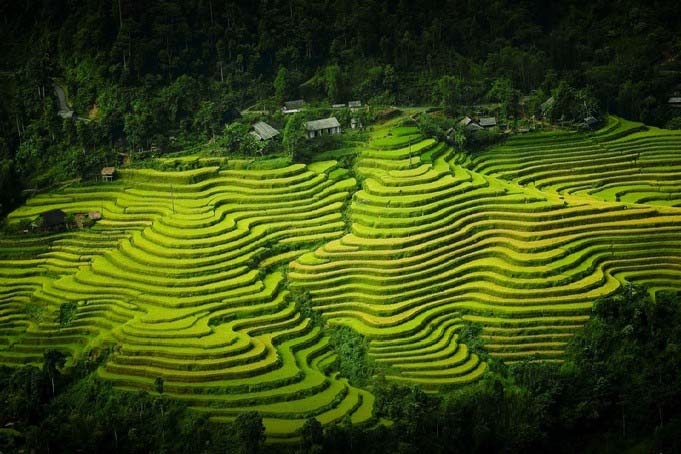 Cycling Mau Chau
Our favorite place for biking in Vietnam! For 20 years we have been coming here with our VeloAsia trips (www.veloasia.com) Quiet foothpaths through villages and farms, nestled between towering karst peaks. We can also cycle through Pu Luong National Park, admiring the terraced rice fields.

An oasis in a region devoid of international standard hotels. No more than a four-star property the lodge is rustic, but clean and comfortable with traditional wooden architecture. Many of Mai Chau valleys attractions are close by, a White Thai village only several hundred yards away and from here we can plan several biking routes. There is a large lounge and restaurant. A pool offers a refreshing place for a dip and to relax post-hike. There are a limited number of spacious rooms that do not face the roadway, and these book early in the season. The hotel does have wifi. 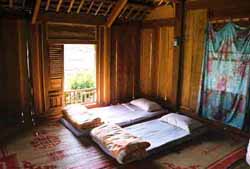 We arrange, seasonally, with one family to share their home on a private basis (no other travelers will be in the home) and have brought our own bedding and other conveniences from Hanoi to make the stay a comfortable one with a simple fold-up mattress and mosquito net (see photo).

The long house family arranges for food to be served, local style, on the floor. Staying in a long house gives you an opportunity to see how the locals live, although slightly commercialized — with a a stock of items for sale to tourists passing through the area. For less adventurous accommodation, the comfortable Mai Chau Lodge has opened with fabulous views over the valley.

Late October and early November is harvest season, when the terraced fields are golden yellow with pleasant weather. Mai Chau can be cool and cloudy, much like Halong Bay, from late December until the beginning of March dipping into the low 60s or 17 Celsius (though Sapa can be at or below freezing during these months), and it if sunshine is paramount on your trip, we recommend heading south to Mai Chau on the central coast. For sunshine, Mai Chau is best to visit from March through June and even warmer July. September can be rainy, although not everyday.